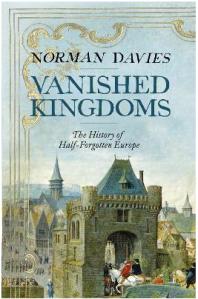 This is an almost impossibly enjoyable volume, which purports to discuss fifteen past European states as the basis of a reflection on the impermanence of things, and the dangers of interpreting the past through the eyes of the present.

Such is the entertaining approach taken by Davies, showing no reluctance to quote from internet sites, guidebooks and secondary sources, that the central thesis becomes almost irrelevant  as he charges through a series of essays which are full of unexpected observations and stories.   How many spectators at an “Old Firm” football match in Glasgow would be aware of the Strathclyde Kingdom which founded their city ?  How many flag-wavers at this year’s Diamond Jubilee will reflect on the fortunes of the royal house of Saxe-Coburg-Gotha?  The Windsors have successfully airbrushed their German origins.   Do wine-lovers know that there  were at least fifteen versions of Burgundy?  (And that is not counting the fictional state in “Passport to Pimlico”!).

This is a work of great scholarship and strong opinion.  It is full of insight and no little humour.  If it remains the sum of its parts, who will argue?  For, where else would we learn, for example, that it once looked as if the empire of the Grand Duchy of Lithuania would last for all time.  Norman Davies makes a convincing and thought provoking case for studying the fortunes of states which no longer feature in modern history.

Reviewed by Les Tucker
Les enjoyed a teaching career in Further and Higher Education, moving from English to leading a Drama and Performing Arts Department. He studied Spanish History at University and still lists History as one of his main interests. He has never stopped being a trainspotter and wears his anorak with pride. His other sources of pleasure, if not profit, are the Turf, the British brewing industry and experimental theatre. Les is a scriptwriter and drama examiner. He describes himself as an omnivore where books are concerned.

Read more from LIFESTYLE, Literature, On our Bookshelf
Saxe-Coburg-Gotha, Strathclyde Kingdom, versions of Burgundy
← The Girl on the Cliff
Traces Remain →