Oh yes it is!  The pantomime season is with us again!

In theatrical terms, nothing is more traditional in Britain than the pantomime.  It owes a lot to Commedia dell’ Arte but you’ll not see anything remotely like it anywhere else in the world.  The pantomime as we know it today has evolved over centuries starting with the mummers’ plays of the Middle Ages and is a traditional Christmas entertainment.

For adults, the beauty lies in knowing exactly what to expect: the pantomime dame, not really a drag queen but a man dressed in a frock;  good and bad fairies; a principal boy played by a woman; an animal of sorts powered by actors in suffocating costume.  Traditional participation, yelled at full throttle, such as ‘look behind you!’ or ‘oh no it isn’t!’ comes completely naturally, as does the enthusiasm to sing along (and frequently perform actions to) the inevitable song that has words displayed on the stage for all to follow.  For children, it’s often the first experience of theatre and one that certainly doesn’t expect them to sit quietly and be seen but not heard.  The delight of watching kids really enjoy themselves often rivals what’s happening on the stage.

Entertainment such as this is to be found the length and breadth of the land.  But to experience the crème de la crème of the genre, all you need to do is to make your way to the Hackney Empire in central London.  Built in 1901, originally as a music hall, it is the ideal venue, now restored to its former glory.  And this year it welcomes back Clive Rowe, the pantomime dame to beat all pantomime dames, as Mother Goose.  With a superb voice, cheeky demeanour and amazing empathy with an audience of all ages, he dazzles in one outrageous costume after another and is the lynchpin of all around him.  Sharon D Clarke, whose powerful voice almost shakes the rafters of the old theatre appears as the good Princess Charity, and her evil sister Princess Vanity is played by Susie McKenna, who has devised pantomimes at this theatre for the many.  A break with tradition has the young male lead played by the charming male Kat B and the stage is awash with characters from nursery rhymes and fairy tales.

The Hackney Empire, unlike so many venues, doesn’t play host to today’s pop and soap stars who perhaps draw audiences where they appear because of their celebrity.  There’s enough talent amongst the Hackney community to sustain the show without big names.  And that includes Princess Priscilla, the larger than life goose, who lays the golden eggs that tempt Mother Goose to a life of greed rather than good.  Of course, in the end, good prevails, evil is defeated with those characters seeing fit to change their wicked ways, and everyone lives happily ever after with a wedding finale that allows almost all the large cast to don yet one more frock. 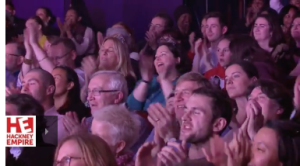 And as the six-piece band, who have performed all evening with such verve and enthusiasm that you might have been forgiven for thinking you were listening to a full size orchestra, play out the audience as they leave enchantment and meet up again with reality, the smile on everyone’s faces says it all.  Popular theatre like this should never be mocked.  It’s truly wonderful, and I can’t wait for next winter’s pantomime at the Hackney Empire!

Mother Goose is playing until 4 January 2015