Great Railway Maps of the World 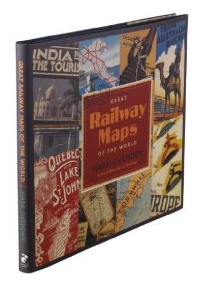 A colourful and beautifully realised book that details different railway maps, past and present, from around the world.  The scale of the reproductions limits the use of the book as a reference work – some of the maps can only be interpreted with high magnification – but its true worth lies in its artistic presentation of the varying styles adopted in mapping railway systems.

The accompanying text is clear and comfortingly non-specialist, and the book is enriched by the inclusion of advertising poster images commissioned by railway companies.

The book also tries to show in several cases how railway systems have shrunk – USA and the United Kingdom being familiar examples – and also how developing countries have grown their networks.  The book uses these as examples only, for its aim is not to provide a comprehensive history of the railways of the world.   What it does do, in its 138 pages, is to show how the functional railway could make striking use of art and design in proclaiming its identity and in marketing its services.

Reviewed by Les Tucker, contributing author
Les enjoyed a teaching career in Further and Higher Education, moving from English to leading a Drama and Performing Arts Department. He studied Spanish History at University and still lists History as one of his main interests. He has never stopped being a trainspotter and wears his anorak with pride. His other sources of pleasure, if not profit, are the Turf, the British brewing industry and experimental theatre. Les is a scriptwriter and drama examiner. He describes himself as an omnivore where books are concerned.

Read more from Great Gifts Anytime, LIFESTYLE, On our Bookshelf, Out & About
railway book, Railway maps
← A history of the World in 100 Objects
Tear Aid – a lifeline for harassed parents →