Discover the amazing versatility of this popular herb

Glance at a borage plant and you’ll see a sturdy erect plant, covered with short, stiff, prickly, silver-white hairs that shine in the sun and large, oval, pointed, darkish-green leaves. But lift up a flower (they’re inclined to droop down) and reveal the beauty of the superbly formed, bright blue, star-shaped flowers of five petals with a central cone of deep purple-black anthers.

The name borage could originate from the Celtic ‘barrach’, a man of courage. Certainly, Celtic warriors drank borage wine and used the plant dye to paint their bodies before running naked, into battle. Ancient recorders Dioscorides, Pliny and later the Elizabethan herbalist, John Gerard, all have mentioned the marvellous effects of the plant on mind and body, dispelling melancholy and inducing euphoria. In medieval times it was used as a tonic to lift the heart and spirit, promoting bravery on the jousting field. To quote an old saying, “Ego Borage gaudia semper ago,” I, Borage, bring always courage.

In the lands bordering the Mediterranean, its name is spelt with a double ‘r’, perhaps from the Italian ‘borra’ or French ‘bourra’, hair/wool, noticeably covering the plant.

Though an annual, it readily seeds itself, the four brownish-black nutlets opening to reveal black seeds. Seed sown in March and covered well with soil, germinate to maturity very quickly, usually in two months. Alternatively, the plants can be propagated by division of the rootstock in the spring, or by cuttings of the shoots pushed into sandy soil in a cold frame in the summer or autumn. The preferred soil seems to be moist, loose, stony, with some sand and chalk in it, in a sunny position. Yet borage is often found in heavier soils and partial shade and frequently on waste ground. 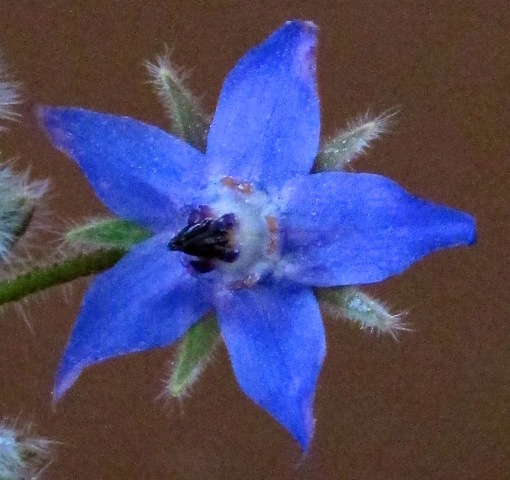 Within a garden, the 30-60cm (1-2ft) plants may be sited in the herb patch or as companion plants with strawberries. Bees love the sweet nectar in borage flowers, converting it to superb honey (hence its nickname ‘bee bread’), whilst also pollinating the strawberry flowers. And growing borage among tomato plants can improve the flavour of the tomatoes. Borage is also attractive in a window box or centrally in a hanging basket surrounded by shorter plants, so the beautiful drooping clusters of flowers will be visible from a lower angle; a central cane support may be needed. In mild, sheltered conditions, the plants may be in flower until November. Some plants produce white flowers, while others can start off pink and turn blue.

The leaves must be picked dry, when the sun has dried the dew and as the plant is coming into flower. Strip off each leaf singly, discarding any with marks on them. Some people find it necessary to wear gloves when handling borage as occasionally it can cause skin dermatitis. In the home, dried borage flowers can be added to potpourri.

Medicinally, borage can be utilised as a diuretic, demulcent and emollient. Its high saline mucilage content makes it a good diuretic, aiding the functioning of the kidneys. Its anti-inflammatory properties can help internally soothe bronchitis, catarrh, feverish colds, dry rasping coughs, pleurisy and rheumatism.

In France it is used to treat some pulmonary problems and fevers, increasing sweating and so removing toxins from the body via the skin and urinary system. Its high calcium and potassium salts can help reduce temperature when taken as a hot infusion. Use 30g (1oz) of fresh leaves (dried if fresh are not available), and infuse for five minutes in 600ml (1pt) of boiling water. Then strain it and drink three to four wineglassfuls a day, adding honey if preferred sweeter. Whilst treating a cold, Mességué recommends using borage in foot- and hand-baths.

The above infusion also can be of help as a gargle for sore throats and laryngitis, and as a mouthwash for stomatitis and bleeding gums.

A poultice can be made by placing crushed leaves and flowers between two plates over a pan of boiling water – the plates will get hot. This poultice can be bandaged lightly on inflamed or irritated skin, on sores and wounds and used for arthritis and gout, renewing it when cold, until some relief is felt. Or a lotion can be made from equal quantities of borage juice and water.

Borage tincture, 5ml (1tsp) taken three times a day, can act as a tonic for stress, and be used for countering the effects of steroids and after steroid therapy. This has been backed up by modern research confirming that borage stimulates the adrenal glands (the organs of courage), to secrete adrenalin.

Making a pulp of the fresh leaves and drinking 10ml (2tsp) of juice, three times a day, can help with problems of depression, grief or anxiety. Instead of Evening Primrose Oil, capsules of Borage Seed Oil can be taken daily for some cases of eczema, hay fever and rheumatoid arthritis. Research has indicated that massaging borage oil into the cold, bluish-white fingers caused by Raynaud’s disease may help alleviate the pain The oil may assist in cases of menstrual irregularity, irritable bowel syndrome and even as a first aid for hangovers. Remember though, what may benefit one, may not another and as a medication, it should not be used indefinitely but for short periods at a time.

As an external application for annoying spots, equal quantities of borage, dandelion and watercress juice can be mixed to form a lotion (freshly made each time), left on the spots until completely dry, and then washed off, repeating the process a few times. Borage also can be used as a facial steam for very dry, sensitive skin and there are commercial products on the market such as Starflower Body Lotion and Borage Seed Oil.

The Herbal Health and Beauty Book by Hilary Boddie. Published by Optima (Little, Brown and Company (UK) Ltd, 1994 ISBN 0-356-21030-8 contains herbal remedies for health problems such as dizziness and laryngitis, as well as beauty treatments for the face, feet and hair.

A Handful of Herbs by Barbara Segall, Louise Pickford & Rose Hammick. Published by Ryland Peters & Small, London, 2001. ISBN 1-84172-109-3 combines the notes of a horticulturalist and a food writer, illustrated with suitably refined photos;

Sìne Chesterman
Sìne’s interest in gardening and botany started at an early age with her own patch in her parents’ garden, and learning which plants were natural healers. Brought up with old and tested remedies, and gardening methods, now termed ‘organic’, she still practises natural ways of pest control.