Mobile theft – So quick, So Devastating 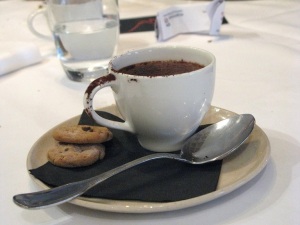 While having a coffee in Regents Street yesterday, I heard a woman sitting at my table suddenly say ‘He’s taken my mobile’.

She got up to follow him but he had disappeared into the passing crowd. She ran back and rummaged through her large bag in a vain hope that she was mistaken and pleading with her friend to call Vodaphone to cancel her account. It took a long time to contact Vodaphone and in the meantime the woman swung between anger to despair with copious amounts of tears.

Her mobile had been lying on the table next to her coffee and she had been rummaging in her bag when a man in a red tea shirt had just reached out and taken it as he walked by. She could hardly believe it had happened it was so quick.

I was deep into a newspaper puzzle and hadn’t seen it happen.

As I don’t like mobiles making a noise, when I do have it with me it is always on vibrate and in my pocket so I feel it when it goes off. So it’s unlikely I would ever put it on a table like she did. I felt a bit of a spare part, not having seen it happen and having nothing to offer in support.

The government has just called on the mobile phone industry to do more to protect handset owners against theft. Around 2% of British mobile phone users report they have suffered a theft in the last 12 months, although for teenagers the figure is three times higher.

Results  of a Home Office crime prevention contest were announced yesterday aimed at making mobile phones less attractive to thieves. The winning designs will be shown at the Mobile World Congress in Barcelona from 15-18 February.