The Struggle To Stay Fit

We received this email update from the authors of The Serotonin Power Diet blog and thought it worth passing on.

We were on the ferry coming back to Boston from Cape Cod. The boat was crowded and three of us, plus a dog, were crowded into a small booth, happy to have found a place to sit. The two people facing me (I had the dog) were complaining about their sore muscles. Both had gone for long bike rides and were feeling the effects of riding up and down the steep hills of Truro (a small town at the end of the Cape).”I used to be in great shape until six months ago,” said one, “but opening a new office prevented me from doing any exercise. ” The other (we were all strangers) nodded in agreement. “I’m in real estate and fortunately, work really picked up over the spring. I haven’t been to a gym since last December.” I understood. Although I occasionally use the exercycle in the gym, biking outside with an 11-pound dog in my basket, against the wind, and over those hills, made my muscles ache as well.The three of us sighed and reflected on how hard it was to stay fit and how after a period of inactivity, our muscles seemed to have the strength of a wet noodle. The dog had no comment.Studies done by exercise physiologists confirm what we weekend athletes knew already; unless a person is in superb cardiovascular and muscular condition, de-conditioning (the term describing loss of fitness) can occur after only weeks of inactivity. Olympics contenders can take a couple of months off after the Games and experience some decrease in their physical prowess. We ordinary mortals, who have day jobs and after-work hour commitments that make it hard to exercise consistently, will go back to being unfit much sooner, sometimes as soon as in a couple of weeks. 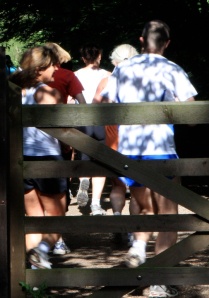 Lack of time to exercise is not the only obstacle to remaining fit. Aging itself increases our loss of physical prowess, as evidenced in the aches and pains when we restart an exercise program. Few 5-year-olds complain about stiffness, lack of breath, and exhaustion after the first days of camp, even though they have switched from sitting in a classroom to running around and swimming. Not so for we elderly folk over 30. The first game of tennis or hike of the summer inevitably results in sore and stiff muscles. The loss of some endurance, speed and fitness with aging is so well-established that competitive athletic events divide participants into different age groups so an “old man” of 40 does not have to compete with a youth of 20. A friend who is a competitive runner told me he doesn’t expect to win a race until he is 80. “By then, the other runners might be slower than me,” he quipped.

Often it is not the pain that comes after exercise that prevents us maintaining or regaining fitness; it is chronic pain we feel before we start to move. Seemingly every joint and bone and muscle is capable of causing sufficient discomfort and often actual pain presents an almost insurmountable obstacle to physical activity.

Denying that we are no longer as physically fit as we once were also prevents us from exercising. We simply don’t want to find out that we can no longer run as fast, bike as far or ski as fast we did in the past. We are like someone who is gaining weight but refuses to get on the scale. Do I want to bike up that steep hill to see if I can still do it? I am not sure. Better to go a mile out of the way to avoid it. 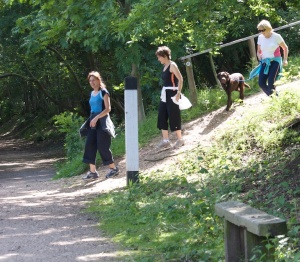 But just as we don’t need a scale to tell us we are gaining weight (trying to fit into a pair of pants that no longer fit is sufficient evidence), we also don’t need to bike up a hill or run a mile to know that our fitness is decreasing. When running up the stairs is just a distant memory, when your arms are too weak to put your suitcase in the overhead compartment of the plane or when getting up from the chair is a struggle, you know that you are certainly no longer fit.

Start now to do something about it. Focus on one or two physical activities that you can do within your fitness and time limitations. Stair climbing, walking quickly a short distance, carrying or lifting moderately heavy objects like a grocery bag, balancing on one foot, or getting up from a chair without using your hands (and grunting) all count. Track changes in your fitness just as you might track weight loss. Can you climb one flight of stairs with any change in your breathing? Can you stand on one foot for the length of a television ad? Are you able to get up from a low chair or stool easily? Do you need help in putting away heavy groceries on high shelves?

Already in relatively good physical shape? Then push yourself to get stronger. In the book Alice Through the Looking Glass, there is the following line: “Now… It takes all the running you can do, to keep in the same place.” Sometimes, indeed often, we are satisfied with doing a little less exercise or strength training or balancing regimens than we should. We say, “Oh, I did enough today. I don’t want to push myself.” But unless we to do slightly more today than we did last week, we may not, “stay in the same place,” as it were. Instead, we may start losing small but real amounts of endurance and strength. 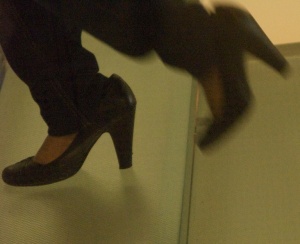 Don’t give up. Don’t allow breaks in your routine to become permanent. Don’t be frustrated if progress in running faster or lifting heavier weights is slower than when you were 20 years younger. Give your body short breaks while you are exercising. For example, walk quickly for five minutes and slowly for one minute. Climb one or two flights of stairs and then wait until your breathing returns to normal before doing it again.

Will you achieve the effortless endurance, balance and cardiovascular output of a young teen? No. Neither will your hair be as thick as it was then. But you will be pushing back the inevitable decline with aging.

Turn what presents itself as a struggle it into a positive opportunity that allows for you the time to stop and smell the roses, all in the name of life-affirming self care.