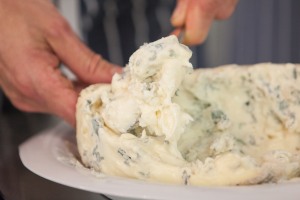 On a misty, damp December evening I found myself under the shadow of St Paul’s Cathedral, beautifully illuminated and rising majestically into the dark sky.  I was searching out the prestigious cookery school, l’Atelier des Chefs, who were to host a ‘cook and dine’ event on behalf of the Consorzio per la Tutela del Formaggio Gorgonzola (the Gorgonzola Cheese Consortium), founded in 1970.  It turned out to be only a matter of yards away and I was given a warm Italian welcome of a glass of prosecco and an apron!  A good start to an informative and enjoyable evening. 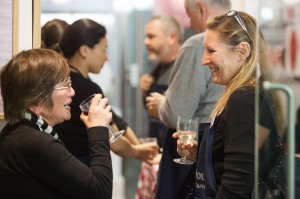 My fellow travellers were a convivial bunch and we chatted away awaiting the call to cook.  I was to learn from them that I was far from the only one who, though aware of Gorgonzola cheese having eaten it from time to time, was rather ignorant of its status.  Its production still follows centuries-old methods and since 1996 it has born the coveted DOP mark – denominazione de origine protetta (Protected Denomination of Origin).  There are also two types:  piccante (80 days cure) and dolce (50 days cure), the first of which was new to me as I was only familiar with the creamier, milder ‘sweet’ version.

Soon the busy prepping around in the cooking area had slowed down and we were invited to try our hand at the special recipes created by the chefs.  (There are links to all of them below, so there’s no need to take notes!) 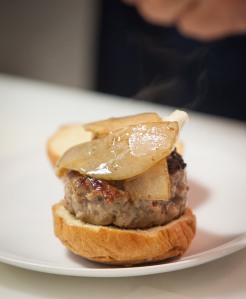 First up were mini pork burgers, topped with the cheese of course, served in a brioche bun and topped with caramelised pears.  To call it a type of burger would have been a great injustice – MacDonalds couldn’t possibly dream up anything as flavoursome and succulent as this combination offered!

Next came the opportunity to make some pastillas, a samosa-shaped parcel of North African brick pastry (though filo can be substituted) filled with shredded butternut squash, shallots, herbs and a touch of gorgonzola). Delicious!  In fact, all the recipes just needed a touch of the cheese as it really is quite powerful stuff, particularly the piccante version.

Then came a break from cooking with wonderful home-made ciabatta bread or roast potatoes to dip into a fondu made simply with gorgonzola (plus a small amount of gruyere to enhance the consistency), white wine and thyme.

More wine was also provided to help wash it down, along with some wonderful éclairs filled with the cheese and topped with honey, sunflower seeds and bacon bits – an interesting combination that worked very well. 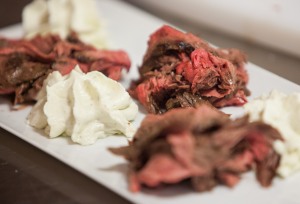 Our final stint at a savoury dish was a flavoursome cut of beef, bavette, marinaded and then cooked rare and sliced thinly, served with sautéed purple sprouting broccoli and topped with a gorgonzola foam.

This last item was my only disappointment during the evening – it seemed to have lost the intense flavour of the cheese during the conversion to the foam, but I have to say that others were not of my opinion!

Another chance to mingle and chat, including the charming Luca who had come all the way from Northern Italy to represent the consortium.  And then it was dessert time – not having a sweet tooth, and, in any case, being replete with the previous offerings, I could only watch as an interesting tiramisu was created (interestingly, with no addition of cheese);  however, I did accept a marshmallow coated in chocolate from a flowing fountain that was very acceptable! 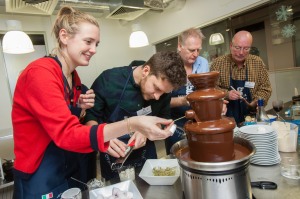 Before the evening I must admit that my image of gorgonzola was of a cheese somewhat dated, a throwback to the Seventies, along with prawn cocktails with marie-rose sauce and Black Forest gateau.

I left the venue, armed with factsheets, recipes, and a small piece of dolce with a greater appreciation of what is an extremely versatile and great cheese.

Jeannette Nelson, Arts Critic   A bit of a culture vulture, Jeannette enjoys art exhibitions, cinema and classical music, but her main interest is the theatre. For several years she ran theatre discussion groups for which her MA in Modern Drama together with teaching skills stood her in good stead. She prefers to concentrate on the many off West End and fringe productions as well as that real treasure of the London theatre scene, the National.