The still balmy days of autumn mean that the hot, sunny days of summer are not yet a distant memory, but promises of imminent cooler weather are a reminder that winter is not a distant prospect.

So now’s the time to shake out the winter woollies and consider options for the darker, shorter days.

Perusing the listings online and in the press, one word resonates in my head: Vienna.  Perhaps it’s because this is the city my parents hailed from, but undeniably, it features in various aspects of culture this season.

First, and most obviously, is the exhibition at the National Gallery in London entitled Facing the Modern – The Portrait in Vienna 1900, which is showing from 9 October 2013 to 12 January 2014.  Check it out on www.nationalgallery.org.uk and if it appeals, go and luxuriate in the works of Klimt, Schiele, Gerstl et al.

The second, perhaps more oblique reference to that once powerful city centre of empire is perhaps more problematic to see. It’s the production of Hysteria by Terry Johnson who also directs what I believe must be the definitive version of his 20 year old witty and intelligent play.  Unfortunately, it is only playing until 12 October, but tickets have been hard to come by throughout its entire run.  This is largely due to the critically acclaimed performance of Anthony Sher as Freud, the pioneer of psychoanalysis. An added frisson is that the action takes place not in his famous Berggasse rooms in Vienna but in his consulting room in Hampstead, a matter of a few hundred yards from the theatre itself. Unbelievably, the play treads the difficult line between farce, surrealism, intellectual debate and the Holocaust with extreme dexterity.  One minute you’re laughing (especially at the mention of a ‘Freudian slip’ referring to an item of underwear), the next you sit back in your seat in shock and horror.  It is a play that only ever so often is revived; catch it if you can.  Meanwhile, if you’re in that part of London, why not visit the Freud Museum in Hampstead, where the Bergasse is recreated in minute detail and includes the famous couch www.freud.org.uk. 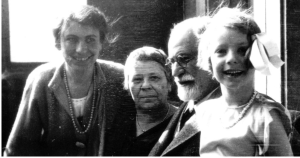 My final reference to Vienna is cheating a little, as it concerns a book written about 50 years ago that I came across recently via the BBC website.  In the run-up to the centenary of the start of the first World War, there apparently had been a piece on the Today programme about the fact that in the year running up to the shooting of Archduke Franz Ferdinand in Sarajevo, Vienna had been home, albeit temporarily for some, for several well-known figures: Freud, obviously, but also Stalin, Hitler, Trotsky and Tito.  At the end of the website report, reference was made to the aforementioned book, Thunder at Twilight by Frederic Morton, and a trawl through Amazon secured me a second-hand copy.  It makes utterly fascinating reading and has been passed on to several relatives and friends who have all been enamoured by it. Check if your library can get you a copy, the origins of ‘the war to end all wars’ have never been more clearly explained to me.

Which leads me to mention a production that has not yet started, although tickets have been on sale for a while already. The Theatre Royal Stratford East, created by the grande dame of people’s theatre Joan Littlewood, is reviving its production of Oh What A Lovely War! to mark the centenary. It’s comforting for me to know that nestled in the new buildings, immense shopping centres and the Olympic stadium, this theatre, one of the oldest in the capital, can still put on plays that wrestle with the conscience. It’s playing from 1 February 2014 to 15 March 2014. Check it out on www.stratfordeast.com

Jeannette Nelson, Arts Critic   A bit of a culture vulture, Jeannette enjoys art exhibitions, cinema and classical music, but her main interest is the theatre. For several years she ran theatre discussion groups for which her MA in Modern Drama together with teaching skills stood her in good stead. She prefers to concentrate on the many off West End and fringe productions as well as that real treasure of the London theatre scene, the National.