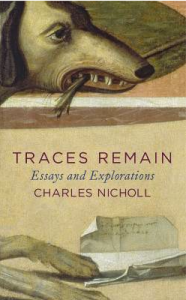 Anyone approaching this collection of twenty-five articles, spanning over twenty years, would do well to consider Nicholls’ own observation : “ … I have always found the details of History more interesting, or anyway more evocative, than the larger perspectives of History.” Nicholls writes of real historical evidence: primary evidence, bits and pieces of detail; the reports of eyewitnesses.

His reputation as an historical detective, established by his work on Christopher Marlowe, Leonardo da Vinci and Shakespeare, is further enhanced by this essay collection. The worlds he writes of are not just brought to life. They are entirely reconstructed through his imagination, using the very evidence he refers to: the traces that remain.

As with most collections, there are some pieces which absorb less than others.  There are articles which might well be classified as extended travel writing, for example.  However, at least half of the pieces show his forensic skills at their finest. Shakespeare and Ben Jonson re-emerge; Nicholl takes a fresh look at Jack the Ripper;  a “four in a bed” scandal, involving visiting Frenchmen, from 1613 is re-examined;  and he asks what really happened to the famous English alchemist who disappeared in Bohemia in the late sixteenth century.

Sometimes idiosyncratic, but always highly readable, the bulk of this collection both entertains and satisfies.

Reviewed by Les Tucker Les enjoyed a teaching career in Further and Higher Education, moving from English to leading a Drama and Performing Arts Department. He studied Spanish History at University and still lists History as one of his main interests. He has never stopped being a trainspotter and wears his anorak with pride. His other sources of pleasure, if not profit, are the Turf, the British brewing industry and experimental theatre. Les is a scriptwriter and drama examiner. He describes himself as an omnivore where books are concerned.