The Day I Sang at The Albert Hall 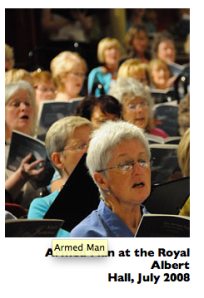 I’d heard about the huge choirs of amateur singers that sometimes gather at the Albert Hall to sing together, but had never got further than thinking vaguely that it might be nice to join in. It took another member of my local choir to start the ball rolling and whip up some enthusiasm, and eventually tickets were  bought for “Messiah From Scratch” in November. It was unfortunate that all four members of our little group then did the same thing – put the tickets aside without checking to find out exactly what was involved – so it was just a few weeks before the date of the concert before we realised that when the organisers called it “From Scratch”, they really meant it.  We were to turn up at 6.15pm in order to be ready for the concert to start at 7pm, without even a few minutes in which to warm up, let alone actually practise the music!

At this stage, we had no way of knowing how many people would be singing with us, and therefore how exposed our own singing abilities and knowledge of the music would be. If we’d known then that nearly 4,000 people would be there to sing, we probably wouldn’t have worried so much, but even so, The Messiah isn’t especially easy music to sing and none of us had sung it all the way  through for years, if at all. Our first task obviously was to get hold of copies of the musical score, and even this wasn’t simple as the organisers specified the exact version to be used. Here, though, we were very lucky as our local library still had just enough copies left for us to borrow even though Christmas was approaching fast. Recordings of the work then had to be found/bought/borrowed, and our unfortunate families had to suffer the dreadful, dirge-like sound of amateur singers droning their own rather approximate version of Handel’s great work along to a professional recording. All four of our group are contraltos, which means we sing the lower of the two female parts, mainly to provide harmony, so we never get the good tunes. I have to confess that in our household, even the cat found pressing reasons to go out once I and/or my daughter started rehearsing! 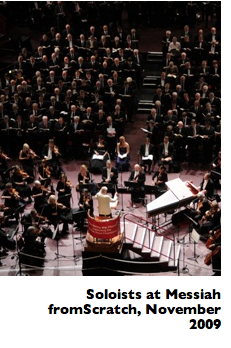 By the week before the date of the concert, we were all beginning to wonder why we’d volunteered for this event. Some friends and colleagues were incredulous. “You mean you have to pay in order to sing at the Albert Hall? You don’t get paid to do it?” And no, we don’t get paid, and we do have to pay (£20 for this performance) because this was a charity event, and the proceeds were going to the British Heart Foundation.

An added complication was the dress code. As ever, men got off lightly as they were only required to wear a dark suit, but ladies were requested to look elegant, with sopranos wearing blue, and the contraltos red. None of us had anything red which could remotely be described as “elegant” so several hours had to be spent in going around the shops in the search for red tops to be worn with black skirts or trousers, but eventually we managed to cobble together some respectable outfits, and by 4 pm on the day of the concert we were all dressed up and heading for the station for the trip to South Kensington. 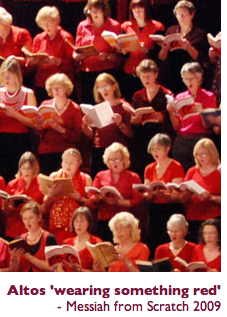 We were in luck; the trains and tubes ran perfectly, and within an hour and a half we were outside the Royal Albert Hall, where people were gathering and chatting enthusiastically. After demolishing the sandwiches which we’d brought with us and paying a quick visit to the Ladies, we made our way to the seats which we’d been allocated, right up in the Circle. Already nervous and a little bit prone to vertigo, I found the steepness of the rake and the height above the main auditorium alarming and for a few minutes was wondering if I’d have to remain sitting for the whole of the performance, but I became acclimatized to it surprisingly soon and began to relax and take in the scene. We’d taken our seats quite early, so were able to watch the other singers gradually arriving and taking up their positions all around the Hall. Lots of people were greeting friends, while others were arriving on their own, clearly content just to be there and to sing. The majority of singers were probably in the middle-aged to mature bracket, but there was a substantial number of young people too. There was also considerable variation in dress. While a lot of women had opted for the safe combination of black bottoms with a red top of some kind, others had made only a minimal gesture towards the dress code with perhaps just a red flower or brooch pinned onto a black T shirt. A few had decided to take the light-hearted approach and were apparently wearing fancy dress, with one rather substantially built young woman happily wearing what looked like the costume of the Red Fairy, complete with frills and red sequins.

By the time we’d arrived at the Royal Albert Hall, it had felt as though we’d travelled quite a long way on a dark winter evening but when Don Monro, the man who had dreamt up The Really Big Chorus in 1974, stood up to speak, he welcomed singers from around the world! Singing alongside us would be singers from Australia, Canada, South Africa and many parts of Europe, so popular have these events become.

His short speech over, the soloists and the conductor, Brian Kay, took their places, and the orchestra struck up the overture. At this point, I noticed a really interesting phenomenon. Up until then all the people I’d been watching, far away on the other side of the hall, had been sitting relaxed in their seats, sometimes bending down to adjust their belongings, sometimes chatting to other singers beside them. But the moment that familiar music started it was if an electric current had passed through them all, or as if an order had been barked out. In an instant, everyone was sitting bolt upright, heads erect, their entire bodies looking alert and ready to sing. 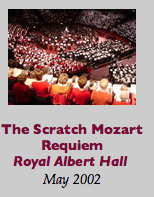 After a beautifully sung aria from the young tenor (“Comfort Ye, My People”) the conductor signalled to singers on the ground floor of the auditorium to stand. It was really at this point that we became aware of how different it would be to sing in such a huge hall with so many other singers. We could see the conductor, but from our position high up in the Circle, he was just a tiny figure far below, and when we lifted our music to sing, he became invisible behind it! Instead of relying on him for cues as to when to come in, when to slow down, and all the other more subtle variations in the performance, we’d be dependent on hearing other voices singing our part in other areas of the auditorium, the singers who were much closer to the conductor and could therefore follow his directions.

I think it’s fair to say that the first few choruses were a little bit ragged, while the singers gradually got used to the acoustics. At one point, I could see the conductor frantically signalling to the huge mass of sopranos to sing more quickly, but, however distinguished and able he may be, it’s a brave man who takes on a thousand sopranos alone, and very wisely he  deferred to their group judgement and allowed the choir to find its own pace. Before very long, our little group had relaxed in the knowledge that any musical mistake we might make would be lost in the huge volume of sound being produced by so many singers.

One of the delights of singing with these big choirs at the RAH is being able to watch and listen to the soloists. For this performance, the soloists were all very young singers in training for professional careers, and to me at least their extreme youth added poignancy to the music. 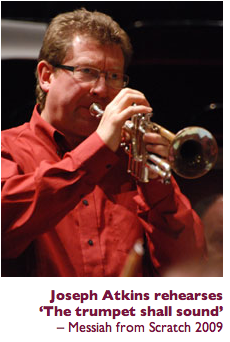 Our position in the Circle meant that we were well placed to make a dash in the interval to the bar, so by the time the second half began and our gin/vodka’s were taking effect, we were feeling quite comfortable and ready to tackle the remaining choruses with enthusiasm. By now, the choir was (almost) singing as one, so that by the time we reached the famous Hallelujah Chorus, I think we produced a very creditable performance. Knowing that our audience would all have been eagerly anticipating this most famous of all choruses probably tipped the tension rates up a notch, and I think we all gave it all we’d got. It certainly got a rapturous reception from the audience! Many people think that the Hallelujah chorus is the final part of the Messiah but in fact there are more arias to follow, before the last chorus “Worthy is the Lamb”  leading into the final section known as the Amen chorus. This is a far more sombre and spiritual chorus, and I felt that the huge choir sang it with a surprising amount of sensitivity and feeling, perhaps aided by the knowledge that this marked the end of the occasion.

Discussion of the evening had to be postponed until we’d accomplished the journey back to the railway station, but, once on the homeward-bound train, we shared our thoughts. My daughter and I agreed that we hadn’t experienced the huge rush of emotion felt by a lot of singers, which was a surprise and a bit of a disappointment, but I suspect that this was due to our position in the Hall. Because we were so high up, the sound of the rest of the choir was coming to us almost as if we were listening to a recording, whereas I think that if we’d been seated downstairs in the main auditorium we’d have been far more aware of being part of a huge group of singers. We agreed that it was only towards the end of the concert that we’d really relaxed and enjoyed ourselves, so we’re all keen to have another go before too long. It was clear from the joy and sense of achievement on some of the faces around us that taking part in this event means a huge amount to many people and I suspect that like them, we’re already hooked and will be booking our places for the next big chorus. This time though we won’t get so stressed about our musical abilities (or lack of them) as all we need to do is relax and prepare to enjoy ourselves and let  the music and the other singers scoop us up and carry us along with them.

For more information about how The Really Big Chorus began, and how to get tickets, the website to go to is  www.trbc.co.uk