Moving house is a traumatic event, or at least it has been for us, and we haven’t even moved yet!

First stage was to have the house assessed by a surveyor of our choice. He reassured us our concerns were nothing to worry about and gave us advice about what he thought we could do to make the most of the best features of the house. So all those little things we kept putting off like settlement cracks were dug out and filled, the chimney was repointed, the conservatory roof cleaned, plasterwork repaired, decorating throughout, carpet cleaning and, best of all … an oven clean! Yes, I recommend it to anyone who has let their oven become an overwhelming task. I only wish I had had it done earlier, the new house owner will benefit from it more than me.

So now we have an exceptionally clean, bright, and rather attractive house to sell. Ah, but what about clearing out all that stuff we have accumulated over the years – there are even boxes of stuff we brought with us that have never been opened since we moved in and there are some from previous houses! That’s where I found some 70’s clothes I couldn’t bring myself to throw away. 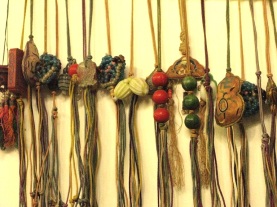 We heard of an organisation called Freegle. We just announced on the website items we would like to give away, chose whoever we thought would benefit best from them. The items were collected and lo and behold our garage, loft and cupboards were cleared in just a few weeks. So all is now neat, clean and tidy … a bit of a job to keep it that way.

I did hold back some stuff I thought might sell on eBay. Being an eBay virgin it took me time to get into what seemed to be endless pages of How to Instructions.

I gradually eased my way in … by buying rather a lot of stuff! Oh well, I’ve now successfully sold a perfectly functioning camera, a kitchen shredder and some clothes. The clothes seem to go for peanuts, but the camera and shredder sold for decent amounts.

We’ll be writing more about eBay experiences in the near future.

In the meantime we’re off again to view more houses. Having had two refusals of our offers we are a bit sensitive to rejection, but ever travelling hopefully we will continue to offer what we think each house is worth to us.

Next step, sell our house.