Garden – New Plants and Sundries for 2012

My favourite garden press event was held this month and try as I might I didn’t get to visit all the stands I wanted but the ones I did visit were very rewarding.

My intention was to source plants for the front garden and give it a completely new look this year and I found some great new plants. Beautiful Monet coloured petunias for the hanging basket and scented begonias for the front of the bed from Gardening Direct, excitingly coloured sweet peas from Kings and from Thompson & Morgan for the Garden Maypoles  I have been promised by Haxnicks.  Jo Swift suggested white shamrock from Homebase and a wonderful chocolate cosmos that he has chosen for the Chelsea Flower Show garden he has designed for Homebase. I’ll definitely get that cosmos it’s the one plant I can’t resist – they will be available in store from March.

Although the front garden is only 26 ft x 12 ft I still felt the pressure of choosing plants in terms of height, spread and of course colour. So I was really pleased to find Plantify – an inspiring, free online garden design tool available to everyone that I will be using it to redesign the front garden.

This year Crocus has some absolutely gorgeous new plants on offer – one in particular Fairy Magnolia Blush looks absolutely wonderful, as does the white with blue back anemone Wild Swan  – if only I had a bigger garden! And the Forest Series of hepaticas look absolutely beautiful, hope I can fit some in. 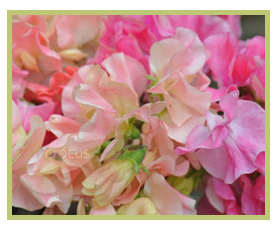 And just look at these sweet peas from Crocus – irresistible!

At the event I was given far more packets of seeds from Thompson & Morgan, Homebase and Kings than I could ever use so if you would like a packet or two just send a stamped addressed envelope to me. There is a range of flower and vegetable seed, if you would like one or the other, or both, just write veg and/or flower on the back of the envelope.

My grafted tomato plants grew so well last year only to be cut down in their prime by blight that I had moreorless given up on the idea of home grown tomatoes because once blight, a disease of the foliage and fruit causing rotting, is in the soil it is difficult to avoid further contamination. 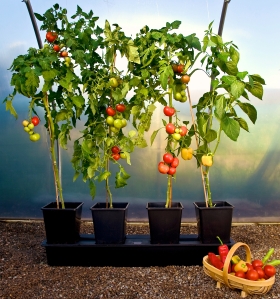 Then I came across the Quadgrow Planter. It has four pots that sit in a reservoir of water, taking away the possibility of erratic watering. It’s possible to link it direct to a water source either mains water or a water butt. I plan on siting it on a path in a south facing part of the garden. I’m hoping that particular cunning plan will mean blight won’t get a look in with the plants getting a steady supply of water and nutrients.

I have been promised some grafted tomato plants that have two varieties on each plant! Sounds really exciting.

My Heath Robinson style protection for the brassicas worked really well last year, deterring the pigeons and cabbage white butterflies, even though the netting was not wide enough and I had to use additional netting. This year I’ll be trying out a crop cage from Greentree Products that should work much better. Easy to fix clips and netting ties sound very attractive. Greentree are also supplying a Grow Cloche to try with one of our metre square raised beds. We’re convinced this will be much better than the hoops and fleece we used last year that has gradually broken down since last autumn.

Absolutely fascinated by insects, I was taken with the insect house from Neudorf, available on the web. One is on its way and I’m looking forward to observing what uses its 5 star bedrooms! The mason bees love a pipe filled with nesting tubes I’ve had for year and are fascinating to watch – see short video. I’m hoping for a wider range of insects this year that will give more photographic opportunities.

My gardening shoes have given me really good service for the last 17 years and I decided to replace them with a pair of Backdoor shoes. I chose ones with the bluebell print but as you will see on their website there are many other flower designs to choose from.

A range of gardening gloves were on offer and I thought it was time to replace a pair of Skoma gloves I’ve used continuously for the past three years and have seen better days. I liked them because they were flexible, wicked away perspiration, and gave me sensitivity, lacking in some gloves where you can’t feel anything. They survived frequent washing in the washing machine, but recently they have hardened a little and so I’ll be test driving three different levels of protection from Joe’s gloves – all rather brightly coloured – at least they won’t get lost in the compost bin. And a pair from Ethel Gloves, made from goatskin and bamboo, referred to as the little black dress of gardening! I have to admit they are rather stylish, I’m tempted to just use them for driving!

A rolling composter, one that be kept at ground level and pushed backwards and forwards to aerate your compost is by far the fastest way of creating compost – ready in six weeks!  I’ll be trying out the Rollmix Composter and will write about how it works for us.

As you can imagine I had rather a lot to get home and was glad to reach my comfy chair by the fire, have a quick snooze and dream about the garden this year.