New guides to London are proliferating! Last July I reviewed the London Sketchbook for this magazine, a personal and somewhat quirky look at the capital that took certain areas and walked you through them.

Now, like the proverbial buses (you wait half an hour then two turn up at once!) I have in front of me London’s Hidden Secrets by Graeme Chesters, with the sub-title A Guide to the City’s Quirky and Unusual Sights. Strangely enough, I wouldn’t particularly have chosen the word ‘quirky’ to describe this one, though certainly ‘unusual’. This is a beautifully produced and methodical guide that takes you from the heart of London to the outer suburbs and describes in precise and concise terms points of interest that are certainly not on the tip of every tourist’s tongue. 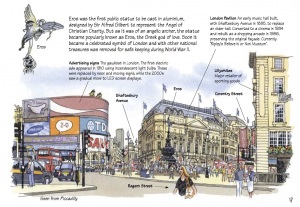 The layout is clear and consistent: Every sight has two pages devoted to it, the left displays photographs and an ‘at a glance’ box which gives you the all important information on location, cost and opening hours. (There is a ‘health warning’ right in the front of the book in a stand-out red box to check times as they may have changed – with continuing cut-backs some places are shortening visiting times). The right page is devoted to an informative and very readable written description of the sight with a charming one-line quote at the end from the author, summing it all up as he sees it.

So let me whet your appetite with a few examples, starting right at the heart of the city. Have you ever noticed the Twinings Teashop and Museum opposite the Royal Courts of Justice? Or in particular its 18th century doorway with its two Chinese figures and the company’s golden lion? The quote at the end of this one is ‘More tea, vicar?’, a lovely illustration of the liveliness of the author’s writing.

Moving outwards, would you like to see ‘Some of the best Italian art in London’? Then head for the Estorick Collection in Canonbury, which also often has interesting temporary exhibitions and is particularly regarded for its Futurist works, all housed in a lovely 19th century building. Interested in Art Deco architecture? Then, if you’re a north Londoner like me, grab your passport and head south of the river (though not very far) to Tooley Street by London Bridge station and look carefully at St Olaf House. I’ll confess that I must have been past here on numerous occasions and never noticed the intricacies of the building before, both the Tooley Street side and the Thames side. I’ll be looking out for it next time I’m in the area.

And finally, if all Neasden conjures up for you is the magazine Private Eye, take a Tube there and wonder at ‘Europe’s first traditional Hindu temple’ with its souvenir shop (of course!) and a restaurant serving Indian vegetarian food. Named, apparently, by Readers’ Digest as ‘one of the seventy wonders of the modern world’.

I thought I was well-versed in the standard and less-standard fare that London has to offer. Since I’ve had this lovely book in my possession I’m not so sure!

London’s Hidden Secrets is published by Survival Books priced at £10.95.

Jeannette Nelson A bit of a culture vulture, Jeannette enjoys art exhibitions, cinema and classical music, but her main interest is the theatre. For several years she ran theatre discussion groups for which her MA in Modern Drama together with teaching skills stood her in good stead. She prefers to concentrate on the many off West End and fringe productions as well as that real treasure of the London theatre scene, the National.