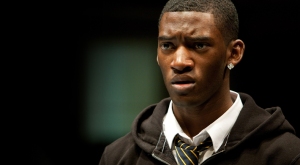 Set in a sink school, it is fast moving, witty and poignant.  The central character is a liberal teacher (always write about what you know!) who is wrongly charged with assault and racial abuse.  A group of excellent young actors play the schoolkids in whose hands her fate lies.  Unlike other reviews I’ve read of this play, I’m not about to give away the plot – if it were a book it would be a real page turner.  This is certainly one to catch

The National’s Frankenstein has to be one of the most written about productions of the year so far and has the added twist of the two leads alternating in the roles of Dr Victor Frankenstein, the mad scientist, and his creation, often in B horror movies referred to as the monster, but here, in a text more in keeping with Mary Shelley’s novel, simply called the creature.

Everything you may have read about Benedict Cumberbatch or Jonny Lee Miller is true – they are truly superb in the lead roles.

The lighting is electrifying, as is the set and the production, directed by Danny Boyle.  My quibble is that the adaptation of the text by Nick Dear is a little clunky and some of the acting of the rest of a cast somewhat wooden.  But nothing can really take away from the power of the piece.

Not surprisingly it has sold out, even for the next set of performances, but will be shown as a one-off in selected cinemas as now happens quite frequently with National Theatre productions.

Worth trying to catch, it really is some experience

Jeannette is a bit of a culture vulture who enjoys art exhibitions, cinema and classical music, but her main interest is the theatre. For several years she ran theatre discussion groups for which her MA in Modern Drama together with teaching skills stood her in good stead. She prefers to concentrate on the many off West End and fringe productions as well as that real treasure of the London theatre scene, the National.